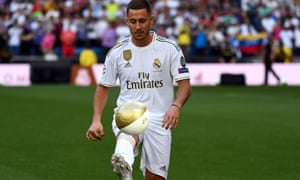 The Belgian intermational remains positive of a silverware accomplishment in the Bernabeu this season, despite an edgy start.
The Ex-Chelsea Star claimed that filling Cristiano Ronaldo’s shirt at Real Madrid has proven quite a challenge.

Hazard switched to Madrid from Chelsea in the summer for a fee of £130m ($167m), but has been a shadow of his self at Chelsea, especially
Although, Ronaldo being Madrid’s club’s all-time top scorer, was sold to Juventus in the summer of 2018, Madrid chose not to replace the five star champions league winner in that same period and have been heavily missing the Galactico figure of that magnitude ever since.

How To Launch A Mobile Marketing Campaign