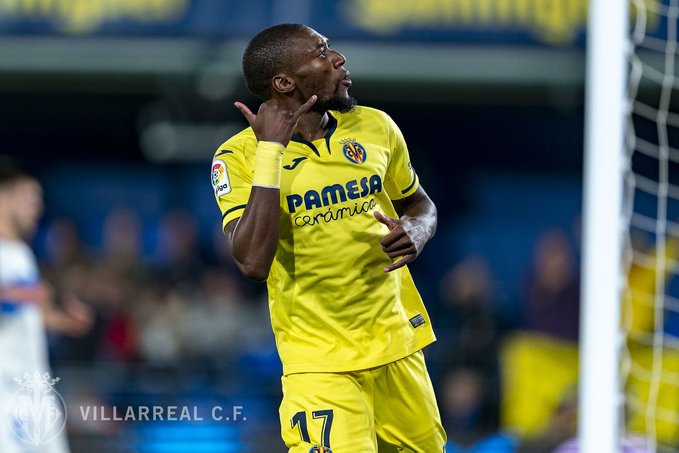 Both Africans were in fine form on Friday night to seal off three points needed by the Yellow Submarines.

The Yellow Submarines have been in good form of lately, winning four of their last six games, and Ekambi got them going early in the 13th minute via a swift counter-attack, Gerard Moreno’s pass finding the 27-year old, and Alaves keeper Fernando Pacheco helpless in stopping the powerful shot from breezing into the bottom left corner of the net.

The visitors would go on to equalise courtesy of Lucas Perez’s beautiful bicycle kick in the 50th minute.

Nigerian Chukwueze started from the bench replacing Andre Anguissa in the 61st minute and sent a long ball to Moi Gomez four minutes later, with the 25-year old’s pass finding Toko Ekambi again, and who tapped the ball in from a close range.

Javier Calleja’s men were in full control of the game as Moreno would ever eventually register his name on the scoresheet in the 84th minute.

With four minutes to go, Toko Ekambi was replaced by Javier Ontiveros left and the Spaniard put the icing on the cake in injury time with a goal.

The 3-1 win lifts Villarreal to third place temporarily on the La Liga table pending results on Saturday and Sunday, but can’t drop any lower than seventh at the conclusion of matchday 10 fixtures.

The Yellow Submarine team will travel to Eibar next Thursday in the midweek round of league fixtures.

Brazil and Argentinal will begin preparing for a unified currency,according to world businness watch