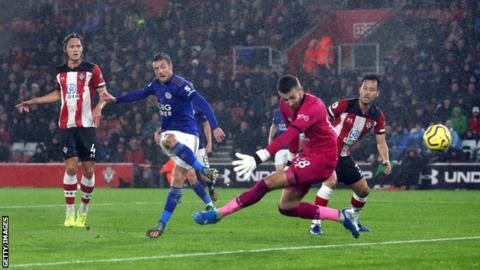 The win sees Brendan Rodgers’ side progress to second place, leapfrogging Manchester City and closing the gap behind leaders Liverpool with five points.

The scoreline which matches Manchester United’s 9-0 win against Ipswich in 1995, was confirmed in stoppage time courtesy of a well converted Jamie Vardy’s penalty.

Jamie Vardy and Ayoze Perez both scored hat-tricks, with the visitors dominance aided by Ryan Bertrand’s red card for a harsh challenge on Perez in the build-up to Chilwell’s goal.

Afterwards, the goal galore came pouring for leceisterwho turned on the style just two days before the first anniversary of the death of club’s former chairman Vichai Srivaddhanaprabha and four other people who died in an helicopter crash.

Youri Tielemans added to the score line making his total goals for campaign to three, while James Maddison scored a superb free-kick on a devasting evening for Southampton, who automatically drop into the bottom three with a heavy goal deficit.

Qatar 2022 confirmed by FIFA to constitute of 32 participating teams.

Where To Find Affordable Health Insurance?